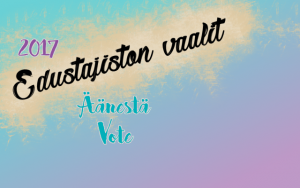 The Election Laureamko’s Council of Representatives is close and candidates have already introduced themselves in the election gallery. Now is the turn of the electoral alliances. Laureamko has offered opportunity for all alliances to write an blog post for Laureamkos webpage. Blogs will be published during this In addition electoral alliances can be found in social media.

Ransut is a new Electoral alliance in Laureamko. They have six candidates. Are they going to bring changes and new idea to the Student Union?

Eskot electoral alliance has ten candidates. According to their Facebook page EsKot doesn’t represent any political conviction but want’s to put the student first.

I love KOK and Lato have combined their strenght with twelve candidates. According to their own words I love KOK is an alliance for the National Coalition Party members, independent  and closet right-wingers. Behind Lato you can find the local organization of the union TRAL.