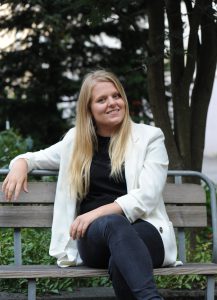 Saana was a member of the Laureamko board in 2017, when her responsibility was student well-being. She was also the head of the advocacy team.  This year Saana has been a member of the SAMOK board and worked among social policy and the FSHS influencing. Saana is studying to be a Bachelor of Social Sciences. Her passion is to promote the position of the students at the University of Applied Sciences.

“The next year will be an important year for SAMOK, because we have at least two big elections head of us. SAMOK has to maintain a conversation about the equality of the generations and offer solutions. As the head of the board I want to make sure that every member of the board can do their best,” says Saana.

“I have followed Saana’s development in SAMOK and I’m impressed. She has the skill to perceive, to analyze and to verbalize complex matters. Unselfish orientation for matters, ability to envision and braveness are all the skills which are needed in the head of the national organization,” states Laurea’s president Jouni Koski.